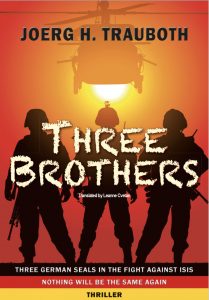 Marc Anderson and his two commando brothers Thomas and Tim are highly respected elite soldiers in the secretive German Commando Special Forces, the KSK. Together with the American Navy Seals, they successfully rescue the crew of a downed American F-15 tactical fighter jet in the Hindu Kusch Mountains under a barrage of heavy fire from the Taliban. However, their next mission – in Northern Iraq – to save two German hostages taken captive by the Islamic State, also known as ISIS, ends in disaster for the three brothers in arms. The perfectly laid-out strategy of Operation Eagle is betrayed, causes Marc, Thomas, and Tim to narrowly escape death. The German Federal Criminal Police Office (BKA) starts the hunt for the informant.

The devoted commando brothers decide to leave the KSK and start a new career together as security advisors with a family-owned company based in Cologne. But the terrorist activities of ISIS continue to determine their fate. The brothers are faced with one of their greatest challenges when ISIS kidnaps company heir Johannes Ericson and his partner Karina Marie. Moreover, the terrorists demand a ransom and extort the German government to immediately suspend its military intervention in the fight against ISIS. It is a race against time to save the couple from assassination.

Joerg H. Trauboth has written more than just an exhilarating novel. Three Brothers unites the current omnipresent threat of terrorism with the author’s first-hand experience as a crisis manager and a military and terrorism expert. The result is an unrivaled political thriller. In this gripping novel, Trauboth foretells possible scenarios for our society in light of the rise of radical Islamic terrorism. Read the full chapter 1 here …

Three Brothers is the English translation of the successful German thriller Drei Brüder (ratio-books), highly appreciated by thousands of readers, as well as military organizations and government officials alike. Jörg H. Trauboth’s storytelling skills can be compared to those of Tom Clancy and similar authors as James Patterson. The German version of the novel will also soon be available as an audio book.

Drei Brüder has been translated into English by (US native) Leanne Cvetan.

Three Brothers is available at:

Inside the Book Lady Jane Lenwood is abandoned and alone in an empty castle in the middle of a dark twisted forest. The locals call her a witch because she has the “sight.” When a wounded stranger is found within the gates, she is warned he carries secrets and their lives will be intertwined. Lady Jane walks with a limp following a riding accident the night her mother left her. And had given up on having a normal life. She blames her misfortune on the current Duke of Rathborne. Max Radley is sent by the king to find a traitor. His search leads him to Rathborne Castle and the beautiful woman living there. He must keep his identity a secret in order to find the traitor. Lies, deception, and a grand scheme to relieve him of his wealth have the real villians framing him for treason. Only Jane and her supernatural ability can save him, but in order to find the answer she must face her past and the feeling she has for him. The Witch of Rathborne Castle  is available at:   You can also watc