Along Came Jones by Victoria Bernadine 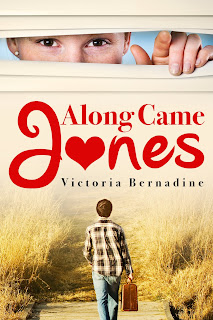 Benjamin Ferrin Macon-Jones has it all: a luxurious lifestyle in Toronto and the love of an intelligent, ambitious woman…until that same woman refuses his marriage proposal, tells him he’s a detriment to her career, and leaves him. Unable to deal with his cantankerous family trying to be supportive, he quietly slips away into the Canadian countryside.

Lou Upjohn has problems of her own. She’s a recluse and agoraphobic, staying safely within the walls of her ancestral home in small town Saskatchewan and depending on Ike, her best and only friend, to deal with the outside world. Only Ike’s just married another woman and now he’s moving to Vancouver. Before he leaves, he hires the new guy in town, Ferrin Jones, to run her errands and do her yard work. Lou isn’t happy, but even she has to admit the stranger looks mildly interesting.
Both their lives could be changed forever if she only has the courage to open the door.