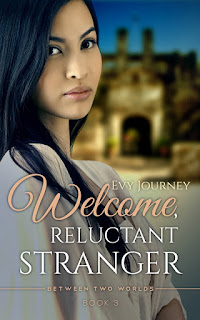 What happens when a brokenhearted computer nerd and culinary whiz gets rescued by a relationship phobic psychologist with a past that haunts her? For Leilani and Justin, it’s an attraction they can’t deny but which each is reluctant to pursue. More so for Leilani whose family had to flee their troubled country when she was only nine.
Leilani is focused on leaving the past behind, moving forward. But when she learns the truth behind her family’s flight—the shocking, shameful secret about her father’s role in a deadly political web—she is devastated.
Is her father a hero or a villain?  Can she deal with the truth?
But the past is impossible to run away from. Together with Justin, she must get her father out of her former home. Can she forgive her father, accept him for what he is? And can she reconnect with her roots and be at peace with who she is?


Welcome Reluctant Stranger is available at: