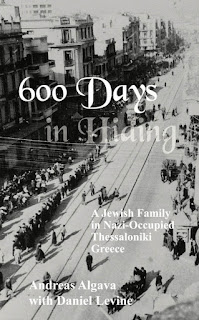 The Nazis invaded Salonika, Greece in April 1941. Within two years, the city’s Jews were shipped by cattle cars to the Auschwitz death camp. There were just three families who stayed in the city and survived because of the courage and kindness of Greek citizens who risked their lives and hid these Jewish families in their homes. Among the survivors were Andrew “Andreas” Algava, who was three years old at the time, and his family. They were five of 56,000 Jews who had lived in Salonika.

Algava, who moved to the United States at the age of seven, has written a gripping account of his family’s experience of survival titled 600 DAYS IN HIDING (600DaysInHiding.com). His memoir stands beside such classics of Holocaust literature as THE DIARY OF ANNE FRANK, Elie Wiesel’s NIGHT, Primo Levi’s SURVIVAL IN AUSCHWITZ, and Nechama Tec’s DEFIANCE.

Two excerpts from 600 DAYS IN HIDING dramatically illustrate Algava’s intention to “communicate the humanity or inhumanity of how we choose to respond to each other.” The first scene takes place in a graveyard:

“Henri stood at the edge of the massive Jewish cemetery sprawling before him. The crypts and headstones extended for thousands of meters in all directions, a vast city of gravestones marking the remains of Jewish men, women, and children buried here during the past 450 years. At one end of the enormous cemetery a small army of several hundred Greek workers were busy with shovels and pickaxes, tearing up the gravesites, pillaging for treasure. Henri watched with a mix of astonishment and horror as Thessaloniki’s Jewish history was being destroyed before his eyes, forever.”

The second excerpt describes the family’s first perilous night as they go into hiding from the Nazis:

“Marcos looked at Allegra. ‘I think the most danger we will face tonight will be from Andreas.’
‘What do you mean?’ Allegra asked, taking a short breath.
‘We agreed he should come with me so if you are caught, he will have his freedom. Is he prepared to play the game we talked about? Being quiet and not paying attention to you?’
‘I think so,’ Allegra replied. ‘He’s old enough.’ Marcos looked at the sleeping child and knew their fate rested with him.
…‘Remember,’ whispered Marcos, as they were about to open the apartment’s door, ‘stay in three separate groups. We’ll gather at the trolley stop on Martiou Street. When you’re out of the ghetto, tear off the stars and put them in your pocket. We’ll get off at Saint Sophie as planned. Whatever happens, just stay calm. We’ll be all right.’ He looked at each of them, and made his face relax with a little smile to reassure them. ‘They look ready,’ he thought.
…A knock on the door and a thin narrow face greeted them quietly. Quickly the six travelers entered. Allegra saw it was a small room in a poor house with a dirt floor. …‘Welcome, welcome,’ said Pachis. ‘It isn’t much, but we can shelter you. Your room is over here,’ and he walked to a room with a curtain as its door. ‘We have some blankets you can use,’ Pachis said, indicating a small pile of old wool blankets.
…‘Good night,’ said Marcos. ‘You’ll be safe here, for a while at least.’
‘Thank you, Marcos,’ Allegra said. ‘We are grateful.’
‘I’m glad to help.’ Turning to go, he said softly, ‘I’ll return tomorrow with a few of the things you said you wanted. It may take a few trips, but I’ll get them here. Get some sleep,’ and he stepped through the open doorway, drawing the drape across the opening.
Quickly setting up a sleeping area, soon everyone had settled down. Henri took his place beside Allegra and his son, and though he was very tired and drained, he stayed awake, still edgy. Eventually the sounds of slumber lulled him to sleep as the night yielded to the dawn of their first day in hiding.”

600 DAYS in HIDING is well-positioned for adaptation as a film. Such a production would provide a powerful thematic counterpoint to news stories about current political upheaval and the drumbeat of dehumanization in the United States and throughout the world.
Algava also notes that he is writing a sequel to 600 DAYS IN HIDING that will address “how as individuals and as society we came to be.” He adds that writing his inspiring story “absolutely energizes me. It’s the fulfillment of a dream.”

Circumvent is available at: