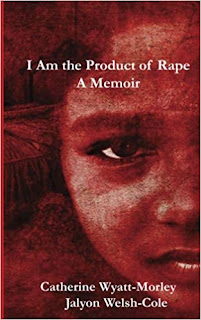 BOOK BLURB:
The phrase “secrets and lies” takes on terrible new meaning in Catherine Wyatt-Morley’s devastating book, I AM THE PRODUCT OF RAPE – A MEMOIR.

Wyatt-Morley’s shocking story traces the repeated patterns of rape and incest that plagued four generations of her family, including Wyatt-Morley’s birth in a filthy basement to her 12-year-old mother, who was sexually abused by her step-father.

“…In the process of writing this book, an extremely difficult journey that has taken years, I was taken to unfamiliar destinations and exposed to unfathomable pain,” Wyatt-Morley relates. “Part of that pain was learning that I was created through the atrocities of incest by a brutally manipulative monster and, while only moments old, (I was) denied by a heartless grandmother who never bothered to look at me.”

Wyatt-Morley wrote I AM THE PRODUCT OF RAPE – A MEMOIR, she says, “as my way of dealing with my personal healing. But through conversations with many diverse women, I quickly began seeing I was not alone. So many had never told anyone of the abuse that has happened to them; yet they have a need to heal, to not feel isolated.”

Wyatt-Morley’s daughter, Jalyon Welsh-Cole, also suffered the terrible legacy of her family when she was abused by her eldest brother. She wrote the epilogue to I AM THE PRODUCT OF RAPE – A MEMOIR, an essay she called BURNING HOUSE, in response to the continued pattern of abuse that formed her familial legacy.

“Most of my family members who have learned of this are dealing with it as well as one can,” Welsh-Cole says. “However, others are still in disbelief and struggle to understand. For over two decades I kept this heinous secret to myself. I have had time to bury it, cry over it, and finally seek therapy and come to grips with it.”

Welsh-Cole’s mother’s story “made me feel as if our bloodline was full of secrets and lies that I wanted to expose,” she continues. “I knew after learning of my grandmother’s story that I wasn’t alone. Today, I cannot allow this to continue to happen in our family.”

As dark and unrelenting as it is, the story told in I AM THE PRODUCT OF RAPE – A MEMOIR leads to a conclusion of overcoming tremendous odds, leaving readers riveted, inspired, and empowered.

I Am The Product of Rape: A Memoir is available at: