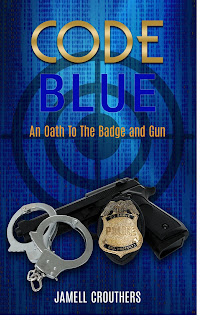 
The Code Blue: An Oath to the Badge and Gun series chronicles a police officer named Gary who has been on the force for a few years. He soon is entrenched in a lot of lies, corruption, racism and agendas being pushed by his superiors. The question throughout this series is whether he as a good cop becomes part of the corruption or does he report it?

Part of this series features his son Gary, Jr who is a young teenager wanting to be like his father and go into the police force. He soon learns through the news daily that the police force is not what it really is. Gary ends up having to share the truths of what goes on at work and the relationship between him and his son changes because of it. Now it becomes up to Gary what he is going to do about what goes on at work.

Code Blue is available at: