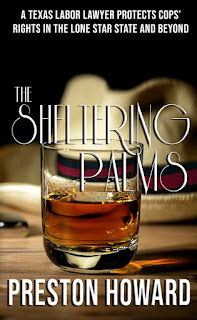 Renowned police labor lawyer, Preston Howard, reached a watershed in his life—a forced retirement from the firm he built from the ground up and a cancer diagnosis. These two events made him take a step back and reflect over a life that had at times been hilarious, irreverent, self-mocking, eerie and even a bit, make that, quite lewd.

A family of unique characters guided the lawyer’s formative years: a bourbon-swilling, brilliant yet flawed grandfather who mentored the young lad in matters of religion, politics and the quest for knowledge; a psychic mother; an oversexed nanny; an aunt and uncle who fought on the front lines of integration; and a fire-balling uncle who got his fifteen minutes of fame in The Show.

Preston Howard first made his mark as a crime-fighting attorney representing the Tucson Police Department. Then he spent over forty illustrious years as a labor lawyer working with police officers and union leaders and handling the gamut of fascinating, high-profile cases across the country and even in other countries.

His many tall yarns might be viewed by some with the greatest suspicion, but his story-telling is undeniably first-class, witty, and absorbing.

The Sheltering Palms is available at: