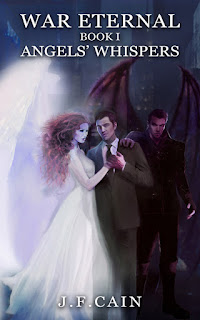 Alex Meyers, a dynamic, global entrepreneur, has an advantage that no other human has ever had: he is protected by Aranes, the Superior of the Angels. While he is skiing, he dies in an avalanche, but his all-powerful protector breaks one of the ethereal world’s most important Rules and brings him back to life. Alex falls head over heels in love with the beautiful Angel, who appears to him in human form. But she disappears just as suddenly as she had appeared.

While he searches for Aranes, Alex discovers her true identity and that he actually might be the high-ranking Celestial Abaddon, who is mentioned in the Revelations prophecy as the one who will defeat Lucifer.

The man who fate has thrust among the world’s superpowers is now living a nightmare. He wants to evade Lucifer’s pursuit, find out who he truly is and once again see the only being he has ever loved. And the only way to do it is to make the ultimate sacrifice.

Angels’ Whispers is the beginning of an epic tale set in modern times. The eternal war between Light and Darkness is at a critical turning point: Angels and Demons, invisible to mortal beings, battle for dominance in the physical world, while Guardians, Vampires and Werewolves, who live among the humans, find themselves on opposing sides in a deadly power game.