Stairway to Paradise: Growing Up Gershwin by Nadia Natali 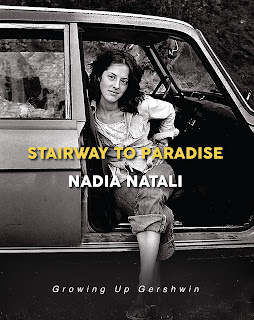 Growing up as Frankie Gershwin’s daughter, the sister of George and Ira Gershwin, was quite a challenge. I didn’t have the perspective to realize that so much unhappiness in a family was out of the ordinary. But I knew something was off. My mother was often depressed and my father was tyrannical and scary, one never knew when he would blow up. I learned early on that I had to be the cheery one, the one to fix the problems. Both sides of my family were famous; the Gershwin side and my father who invented color film. But even though there was more than enough recognition, money and parties I understood that wasn’t what made people happy.

As a young adult adrift and depressed I broke from that unsatisfactory life by marrying Enrico Natali, a photographer, deeply immersed in his own questions about life. We moved into the wilderness away from what we considered as the dysfunction of society. That’s when we discovered that life had other kinds of challenges: flood, fire, rattlesnakes, mountain lions and bears. We lived in a teepee for more than four years while building a house. Curiously my mother never commented on my life choice. She must have realized on some level that her own life was less than satisfactory.

Enrico had developed a serious meditation practice that had become a kind of ground for him. As for me I danced. Understanding the somatic, the inner body experience, became my way to shift the inner story.

We raised and homeschooled our three children. I taught them to read, Enrico taught them math. The kids ran free, happy, always engaged, making things, and discovering. We were so sure we were doing the right thing. However, we didn’t have a clue how they would make the transition to the so-called ‘real world’. The children thrived until they became teenagers. They then wanted out. Everything fell apart for them and for Enrico and me. Our lives were turned upside down, our paradise lost. There was tragedy: our son lost his life while attempting to cross our river during a fierce storm. Later I was further challenged by advanced breast cancer.

It was during these times that I delved deeply into the somatic recesses of myself. I began to find my own voice, a long learning process. I emerged with a profound trust in my own authority. It became clear that everyone has to find his or her way through layers of inauthenticity, where a deep knowing can develop. And I came to see that is the best anyone can offer to the world.
Enrico and I still live in the wilds of the Lost Padres National Forest, a paradise with many steps going up and down, a life I would not change.