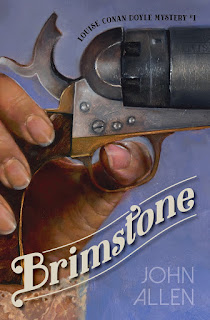 Author John Allen has a theory about the creator of Sherlock Holmes:

Sir Arthur Conan Doyle did not create Holmes. It was Doyle’s wife, Louise Hawkins Conan Doyle, who gave birth to the beloved sleuth.

Allen has put his beliefs to the test, writing and publishing the first of a projected 12-novel series of Holmes mysteries titled BRIMSTONE. His detective is Louise Hawkins Conan Doyle, and Allen names her as the author of the tale he presents, set in 1879 Bristol, England.

In a previous book, SHADOW WOMAN, Allen set out to prove that Louise was the true creator of Sherlock Holmes. The inspiration for his startling and controversial theory of authorship was a 1980s essay by Martin Gardner called “The Irrelevance of Arthur Conan Doyle.” Gardner claimed that Arthur was “too gullible and to easily duped to have created Sherlock Holmes.”

Allen determined that Gardner was correct, but Gardner identified no alternative author. Allen continues, “So I decided to give it a try. I came to suspect Louise as the actual author, but I lacked the knowledge and tools to make a solid case.”

Then the Internet came along, giving Allen a valuable research tool. He became convinced that Louise did in fact create Sherlock Holmes. Allen presented his case in SHADOW WOMAN, which was published in 2017. To further advance Louise as Holmes’s creator, to give her the credit he believes she is due, he is now featuring her in a series of mystery novels, the first of which is BRIMSTONE.

As if Allen hadn’t set the bar too high already, he has added a subtext to BRIMSTONE that explores contemporary wrongful convictions through his Victorian thrillers.

BRIMSTONE brims with appeal to multiple audiences, from lovers of detective stories to those interested in justice for the wrongfully convicted. Sherlock Holmes would be proud.

Brimstone is available at: