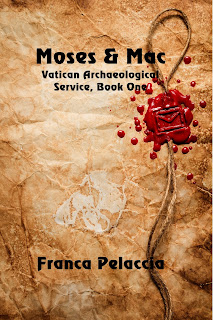 On her dismal 30th birthday, unassuming Victorian scholar Mackenzie Braden receives a mysterious package from her Aunt Sara, urging her to locate Moses’ rod. The most powerful weapon in history will start global chaos if it lands in the wrong hands. Sara was an agent for the top-secret Vatican Archaeological Service. She has also been dead for 30 years and the agency dormant for just as long. Mackenzie’s only clue is a souvenir figurine of Moses, and except for hunky ex-military pilot Eoin Reilly, her allies are as inept as she is.

But nothing is going to stop Mackenzie from recharging her lacklustre life, fulfilling her mission, finding answers about her aunt, and making Eoin her birthday present. Armed with the figurine, Mackenzie sets off with Eoin for the Middle East. There she has to fend off a Ph.D. candidate turned terrorist, a dysfunctional family of treasure hunters, a fake Mossad operative, a manic former VAS agent, the underground tunnels of the Gaza Strip, and a whole lot of rocket launchers. But this is training for the ultimate confrontation with her aunt’s and now her greatest foe, a charming deposed Saudi prince with world domination on his mind.
Moses & Mac is available at: