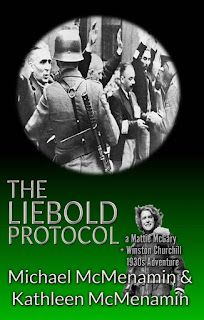 Winston Churchill’s Scottish goddaughter, Mattie McGary, the adventure-seeking Hearst photojournalist, reluctantly returns to Nazi Germany in the summer of 1934 and once again finds herself in deadly peril in a gangster state where widespread kidnappings and ransoms are sanctioned by the new government.

Mattie turns down an early request by her boss Hearst to go to Germany to report on how Hitler will deal with the SA Brown Shirts of Ernst Rohm who want a true socialist ‘second revolution’ to follow Hitler’s stunning first revolution in 1933. Having been away from Germany for over a year, her reputation as “Hitler’s favorite foreign journalist” is fading and she wants to keep it that way.

Instead, at Churchill’s suggestion, she persuades Hearst to let her investigate one of the best-kept secrets of the Great War—that in 1915, facilitated by a sinister German-American working for Henry Ford, British and Imperial German officials essentially committed treason by agreeing Britain would sell raw rubber to Germany in exchange for it selling precision optical equipment to Britain.  Why? To keep the war going and the profits flowing.  After Mattie interviews Ford’s German-American go-between, however, agents of Scotland Yard’s Special Branch are sent by Churchill’s political opponents in the British government to rough her up and warn her she will be prosecuted under the Official Secrets Act unless she backs off the story.

Left no choice, Mattie sets out for Germany to investigate the story from the German side and interview the German nobleman who negotiated the optics for rubber deal. There, Mattie lands right in the middle of what Hearst originally wanted her to investigate—Adolf Hitler believes one revolution is enough—and she learns that Hitler has ordered the SS to assassinate all the senior leadership of Ernst Rohm’s SA Brown Shirts as well as other political enemies on Saturday 30 June, an event soon known to History as ‘The Night of the Long Knives’.

Mattie must flee Germany to save her life. Not only does the German-American working for Henry Ford want her story on the optics for rubber treason killed, he wants her dead along with it. Worse, Mattie’s nemesis, the ‘Blond Beast’ of the SS, Reinhard Heydrich, is in charge of Hitler’s purge and he’s secretly put her name on his list…
The Liebold Protocol is available at: