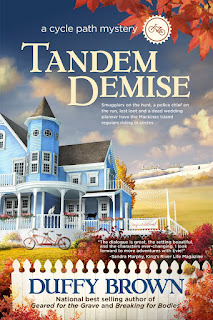 Smugglers on the hunt, a police chief on the run, lost loot and a dead wedding planner have the Mackinac Island regulars riding in circles.


After solving two murders, bike shop owner Evie Bloomfield thought life on Mackinac Island would settle into boredom until she finds out Nate Sutter, island police chief and once-upon-a-time under cover cop is on the run. Some badass guys from Nate’s Detroit days think he stole money from them in a champagne smuggling operation and now they’re headed to the island to get their loot. Evie is determined to help Nate because he’s a good cop. Nate is determined to keep interfering Evie and island locals out of harms way, and the crooks are determined to get their money.
Tandem Demise is available at: