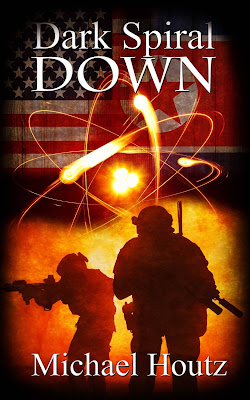 COLE HAUFNER is a reluctant superstar in the professional mixed martial arts world. After his latest fight, his wife and child perish in a car crash. His grief deepens when his brother, BUTCH, a Delta Force operator, is absent from the funeral and reported missing by two furtive strangers who show up unannounced at the burial. Despairing, and acting on a tip, Cole travels to his childhood home in southeast China, looking for his brother.

Butch and his teammate, HAMMER, are the sole American survivors of a gun battle between their unit and North Korean commandos, both sides fighting over possession of a stolen suitcase containing a miniaturized fusion device that could either provide unlimited clean energy or be converted to an undetectable bomb seven times more powerful than a nuclear explosion. Leading the North Koreans is the sociopath, Commander PARK. Pressed into helping the Koreans is a disgraced former CIA operative, BARRETT JENNINGS.

Cole meets with the uncle who raised him, MASTER LI, and is warned to stop his search for Butch. Barrett discovers Cole’s identity (with the help of a genius computer hacker, LILLY), which opens a twenty-year-old wound when Barrett was blamed for the disappearance of Cole’s father, along with the man’s invention. Barrett enlists the 14K organized crime syndicate to help capture Cole. Hammer, separated from Butch during the fight for the device, thwarts the gang’s attempt to kidnap Cole, and the two then set off to find Butch and the device. All parties converge on the city library where Butch, now disguised as a monk, is attempting to communicate with the Pentagon. Barrett and Park capture Butch, while the 14K gang nabs Cole.

Danger mounts as Chinese authorities begin investigating foul play within their borders. Cole fights his way free of the gang and reunites with Hammer.  Both men find Barrett’s apartment and discover Lilly (the man’s stepdaughter), who divulges Barrett’s identity and plan. Cole clashes with Hammer, who is willing to sacrifice Butch in order to recover the fusion device. Lilly offers her help in exchange for her and Barrett’s rescue from Park’s grip. Meanwhile, Barrett discovers the true nature of the case the North Koreans are pursuing and, sensing he and Lilly are to be assassinated by Park once he has the device, frees Butch. Butch, trusting Barrett was sent to rescue him, leads the turncoat to the site where he hid the device. Barrett, hoping to make a quick fortune selling it, shoots Butch before escaping with the case.

Cole, along with Hammer and Lilly, arrives at the location of Butch and finds him gravely wounded. Butch fingers Barrett for shooting him and for stealing the case. Cole wants only to save his brother but Butch makes him promise to kill Barrett and recover their dad’s invention. The revelation that the device is his father’s scientific discovery propels Cole forward to fulfill his brother’s mission. Cole is forced to abandon Butch at a hospital. Cole pursues Barrett to a remote dock where the ex-CIA man is planning to escape China by boat. With the Chinese military now actively looking for Cole, Cole confronts Barrett and Park sparking a gunfight. Barrett kills Park. As Barrett turns the gun on Cole, Hammer kills Barrett. Cole, Hammer and Lilly escape via the boat, and the fusion device is safely returned.

“If you’re in the market for a fast paced, action filled, page-turning thriller, Mike Houtz delivers a must-read novel. I highly recommend this emotional rollercoaster of a book for every die-hard thriller reader…Get it ASAP!”
~Lima Charlie Review

“…this work proves that author Houtz is undoubtedly a rising star in the publishing world.”
~Andrea Brunais, Author

“Mike Houtz takes us on fast-pace adventure in Dark Spiral Down, a thrilling ride along the border between China and North Korea, where Cole Haufner is in pursuit of his Delta Force brother and a device that has the potential to change the world forever or destroy it.”
~Dan Grant, Author

“Dark Spiral Down is a phenomenal debut novel by Mike Houtz. This book has everything readers of the genre love: a great plot, memorable characters, and a powerful voice. It’s a must-read!”
~Ammar Habib, Bestselling & Award-Winning Author, Editor-in-Chief of Thriller Magazine
Dark Spiral Down is available at: