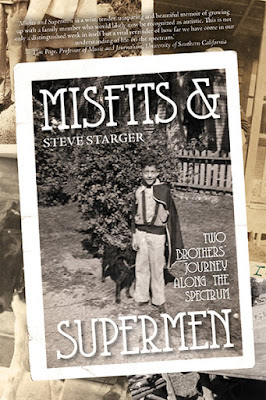 The bond of brotherhood is hard to break, but a lifetime of dealing with familial expectation, bitterness, and psychological disorders can bend and warp it into something nearly unrecognizable. This story tells the tale of two brothers: Melvyn, the elder, whose amalgamation of disorders leave him completely unable to function within society; and Stephen, the younger, whose own emotional and psychological issues are overshadowed to the point where he becomes little more than a pale and twisted reflection of his brother.

On different ends of the same spectrum, Melvyn is blissfully unaware of their troubling connection (or so his brother can only assume), but for Stephen, it is undeniable. He lives with it every day, sensing his own otherness in every twitch, outburst, and inability of his brother to overcome his inner demons. Left largely on his own to deal with his peculiarities-while carrying the burden of being “the normal one,” of whom much is expected- Stephen begins a complicated and unpredictable journey, one which will take him as far from his brother as he can manage to get, even as it brings them inexorably closer.

“If you want an honest book about life with mental illness in the family, this is it. Great writing. Brutally honest. Hard to put it down. Great stories about CT, NY and CA from the 1940s to 2000.”
–Amazon Reviewer
Misfits and Supermen is available at: