Book Teaser: Dreams That Never Were by Greg Messel 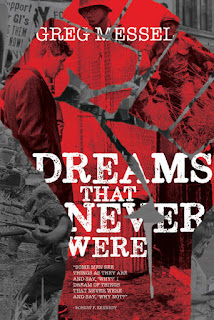 June 5, 1968:  Senator Robert F. Kennedy, then a candidate for President and victorious in the California primary, was mortally wounded by assassin Sirhan Sirhan as he exited the ballroom at the Ambassador Hotel in Los Angeles.  Innocent bystanders were also wounded, including young and idealistic Alex Hurley, a San Francisco reporter.

Swept up in the turbulent events of 1968, Alex is captivated both by the Presidential race and by Vietnam, where he had recently been a war correspondent.  His time in Vietnam had cost him his marriage and bitterly separated him from his own family.

Recovering from his wounds—physical and emotional—a new and surprising love restores his hope.
Part political thriller, part romance, Alex Hurley’s story in “Dreams That Never Were,” captures the turmoil of the day, set against the backdrop of the Vietnam War and America’s wrenching response to it. This novel is the latest historical fiction from award winning author Greg Messel.
Dreams That Never Were is available at: