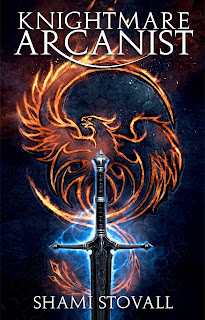 In a world populated by mythical creatures, those who bond with them are known as arcanists—their magic stemming from the connection they forged. Phoenix arcanists gain flames and healing, unicorn arcanists speak with horses and manipulate poison, or even basilisk arcanists who control flesh and stone.

But those wishing to bond must first prove themselves.

Gravedigger Volke Savan, desperate to leave his tiny home island and impress the most beautiful girl he’s ever known, breaks every tradition of the bonding ceremony just to become an arcanist. But when the only creature who will bond with him has a sinister requirement, Volke is put to the ultimate test of worth.

A fast-paced flintlock fantasy for those who enjoy How to Train Your Dragon by Cressida Cowell, Unsouled (Cradle Series) by Will Wight, and Percy Jackson and the Olympians by Rick Riordan.

Knightmare Arcanist is available at: